Just look at this smart watch on Amazon. Can you believe one can get a smartwatch that basically has the functions of a $100+ pebble watch, and sell for $12.80 at Amazon? We know stuff at Wal-Mart are made in China. How about this watch? I bet it’s made in China too, not only that, maybe sold by a Chinese person (or company) too. This is amazing, thinking about the king of global logistics/trade Wal-Mart increasingly lose out to Amazon, for that matter, that person may bought this from Alibaba (Taobao) in China.

On a personal level, I felt I go to Wal-Mart less, because I have other alternatives, Aldi, Targets are good ones. Costco is a more expensive choice. I do sometimes shop at WalMart.com, and pick up at store. The free shipping is nice, but the wait at their counter to pick up things is not. Amazon got rid of that hassle.

We knew Amazon sometimes does not treat its people nice, I joked I will boycott them if they continue to do so. But I need to vote from my wallet too. The other day I came across this Martian Notifier watch at Amazon for $49.99. This retails at $129 at its own store.

(PS: 10-15-2015) The Martian Notifier Watch arrived. Took sometime to set it up. The key is to update its firmware. This is the official web page. And it seems much better on Mac, as I tried twice on Windows 7 and it did not work, tried on Mac only once and it worked out of box. The error on Windows goes something like this “unplug and plug again…” 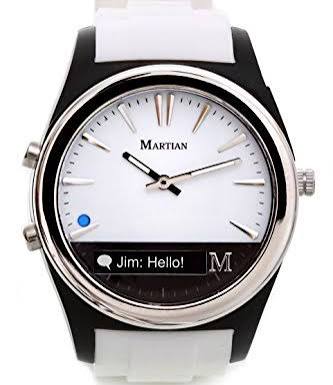 Some other inexpensive items I bought at Amazon recently, and found them useful include this indoor antenna ($6.27)